Difference between revisions of "Whales and Dolphins"

From GoPlett
Jump to navigation Jump to search

There are lot's of whales and dolphins here

An amazing 37 species of whales and dolphins have been recorded off the South African coast. In fact, the coastline shelters one of the most diverse groups of marine mammals in the world. Too bad for us though, many of these are deep sea species which are rarely seen from shore. 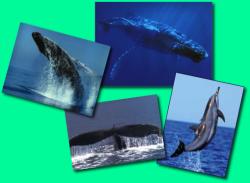 Many species of Whales and Dolphins

Happily, there are some species that prefer the warmer waters of the bay, thereby allowing us to study them from close range. Our primary sightings are:

From June to November, our shores are home to Southern Right Whales, and Humpback Whales migrate through our region between May and December. Other species, such as Brydes Whales, are found all year round. Which explains why there is an official Cape Whale Route, spanning the entire Western Cape, touted as having some of the best land and boat based whale watching in the world.

There are two licensed boat-based whale watching operations in Plett.